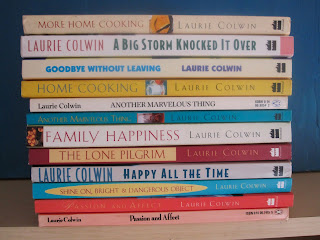 I've been re-reading Laurie Colwin. The first Colwin I read was Home Cooking. I was newly graduated from college and had moved to California and taken a job helping with the author lecture program at a local bookstore. Along with the event and publicity work, I was assigned several sections in the store to monitor--mystery, fiction and cooking. This involved straightening, checking to make certain books were on the right shelves and the dreaded pulling of returns of stock that did not sell, all the while making certain that my favorites were face out. Sitting on the one shelf of "food writing" in the middle of the many shelves of cookbooks, I found Home Cooking. I took it home, read it that night and the next day ordered her entire backlist. As you can see above, in some cases, I even have two copies in case I loan one out.
Home Cooking and More Home Cooking are probably her best known books today, although during her lifetime she was known as a novelist and short story writer. Her New York Times obituary descried her as "a novelist and writer of short stories on modern urban romance and life." The books are clever, funny, joyful and full of characters that I am happy to revisit, as though I am checking on on old friends. Many seem to feel that way. When I mentioned Colwin to a friend, he replied that he "fell in love with, and is still in love with Misty Berkowitz," one of the characters in Happy All The Time, which he feels is her comic masterpiece. Writing in Gourmet in 2001, Anna Quindlen explains that "it is difficult to write about Laurie's fiction without preaching either to the converted or to the clueless. Nine people out of ten have never heard of her, or at least read her; the other one becomes ecstatic, even incoherent, at the mention of her name." My favorite, and on each re-reading I seem to change my mind, may very well be Shine On, Bright & Dangerous Object.
When I read Colwin's fiction, I cook her recipes. There is a meatloaf, inspired by her Halloween dinner suggestions in More Home Cooking, in my oven as I type. But the recipe I want to highlight today is her Nantucket Cranberry Pie, also from More Home Cooking. It is, in her words, "a cake that takes about four seconds to put together and gives an ambrosial result. Fortunately, such cakes exist and are generally found at someone else's home. You then purloin the recipe (because you have taken care to acquire generous friends) and serve it to other friends who in turn, pass it on to yet others. This is the way in which nations are unified and relationships are made solid.


My candidate for an easy, spectacular dessert is something called Nantucket Cranberry Pie, which is not a pie, but a cake. It was served to me in the country by a friend who lives on a dairy farm; she got the recipe from her mother, who can no longer remember where it originally came from. It is now a staple in their family, and the buck stops there.

In an effort to find the true roots of this cake I looked in The Yankee Cook Book by Imogene Wolcott, a classic tome that contains just about everything anyone needs to know about traditional New England fare. In the index was Cape Cod Cranberry Pie, but it turned out to be a real live pie. Our Nantucket Cranberry Pie is definitely a cake; furthermore, it is a snap to make, and, last but not least, it is delicious. If you wanted to try your hand at lily-gilding, you might put vanilla ice-cream, creme fraiche, or (if you have tons of time) custard on the side, but Ann Gold serves it straight, which is, I agree, the best way."

Preheat your oven to 350.
Spread the cranberries, almonds and 1/2 cup sugar in the bottom of a 9" pie plate or springform pan. Mix the rest of the ingredients in a separate bowl until smooth. Pour this batter over the cranberry mixture and bake for around 40 minutes.  Cool a bit in the pan and if you are feeling fancy, flip. Serve warm or cold, plain or with whipped cream or vanilla ice cream.

Posted by winebookgirl at 7:46 AM