Wine and Food of the Tour de France 2022: Stage 17: Saint Gaudens to Peyragudes 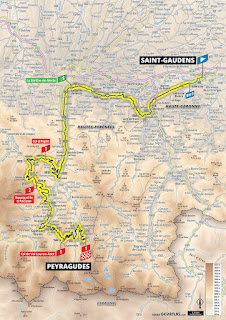 Where are we? Still in the Pyrenees!
Saint Gaudens:  The local tourist site tells me that: The inhabitants of Saint-Gaudens will tell you: if you only see one monument during your time here, it should be the Saint-Pierre church! Renowned as one of the most beautiful churches along the Way of Saint James, it is one of the most recognisable symbols of Saint-Gaudens.
At the heart of the old town, this building is impressive for its dimensions and impressive bell wall. History and architectural buffs, take notice: the collegiate church, dedicated to Saint Pierre and Saint Gaudens, is a true masterpiece of Romanesque art, built between the 11th and 12th centuries.
This is the largest Romanesque church in all of the Comminges (and in our opinion the most beautiful)!
The pretty cloister is a great place to linger and admire the surrounding architecture.
The kids’ discovery circuit, organised by the Saint-Gaudens tourist office, offers young visitors a fun way to explore the Saint-Pierre collegial church!
Le Tour specialties: veal reared under the mother, Pyrenean lamb, mounjetado (cassoulet), Napoléon commingeois (sheep's cheese), millasson (pastry)
Peyragudes: A mountain in the Pyrenees? It must be another ski station. The local tourist site says: Innovative and convivial to make skiing the epitome of enjoyment, this resort is counting on flexibility both in number of ski runs and within the village itself, ensuring maximum snow cover and preservation of the environmentAt the foot of the pistes, overlooking the Louron and Larboust valleys, the resort is divided over two mountain sides- Agudes and Peyresourde. Since its creation Peyragudes has constantly innovated with a particularly well developed programme of activities
Le Tour specialties: frênette (drink made from ash), cheese, honey. In the department: garbure, black pig of Bigorre (AOC), Barèges-Gavarnie sheep, Tarbais beans, Trébons onions, spit cake, wine (Madiran, Pacherenc). 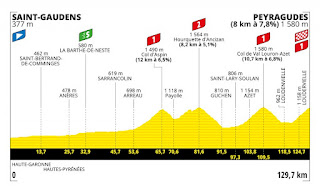 Christian Prudhomme says: The scenario is as sumptuous for the spectators as it is demanding for the leaders, who will have to defend their positions. After crossing the Col d’Aspin and the Hourquette d’Ancizan, attacks could come as early as the climb to the Col d’Azet. And in the final, even the best climbers might flounder when tackling the steep gradients towards the Peyragudes altiport... the third runway to success in the 2022 Tour!
The stage: Climbing, climbing, climbing.
Getting a breakaway was a challenge. With 93 kilometers to go, they were still all together. A break would eventually form.

The race is heading into the 2nd difficulty of the day

Again, Pogacar kept trying, but every move had been nullified. Really great riding from McNulty to support the yellow jersey.
The last challenge on the day was ahead.

⛰ Last climb of the day: here is the 3D profile of Peyragudes

As they climbed, the trio of McNulty, Pogacar and Vingegaard remained together. With 5 kilometers to go, Thomas and Bardet were at 1:20' while the Gaudu-Quintana group was at 2:40.
Two kilometers to go and Thomas had dropped Bardet, but the trio at the front remained locked together.

At the very top, they would drop McNulty with Pogacar taking the win, with the yellow jersey on his wheel. They would be followed by McNulty with Thomas coming in just over 2 minutes down.

Stage:
GC:
The wine:  La Teuf Côtes de Gascogne Gros Manseng 2020 from Copake Wine Works Christy says: We usually wind up doing a Colombard, but this is a gros manseng - so something a little different, but still cheap and cheerful!
From an importer: Domaine de Laballe, consists five and a half organically farmed vines Gros Manseng vines, of which three and a half are being worked biodynamically. It is a one of a kind winery nestled in the heart of the French South West, in between Landes and Gers. The domaine was first bought by Mister Jean Dominique Laudet in 1820. From there, it was passed along generation to generation. The eighth generation is now running the domaine with Cyril and his wife, Julie. By respecting his family heritage and traditions, Cyril is now producing wines with their very own identity. La Teuf, a French slang term for “party” it was formed by pronouncing “fête” backwards, because Gros Manseng = party.
The food: Ah, yes, the annual spit cake stage:
You can only see spit cake listed so many times before you need to find out more, The BBC tells me that: Made by pouring layers of batter on a rotating conical-shaped mould over an open fire, the cake on a spit, called le gâteau à la broche in French, is a typical Eastern European recipe. But according to legend, when Napoleon's soldiers were withdrawing from their invasion of Russia in 1812, they brought it back with them to France. There, the recipe had been transmitted orally, with no written record of the original version. Although the cake is considered rare, according to Slow Food, the tradition is alive and well in two French regions: Hautes-Pyrénées and Aveyron.
(serves 120 people)

Ingredients:120 eggs 3kg sugar 3kg flour 3kg butter 2 litres rum2  cups Ricard While the fire is being prepared, mix the egg yolks with half the sugar. Add the rum and Ricard, and then fold in the flour. Stir in the melted butter. Separately, beat the egg whites, adding the remaining sugar once soft peaks form. Continue beating until they look like ‘snow’, and then combine with the yolk-sugar mixture until a deep yellow dough is formed.Cover the big, conical-shaped wooden mould with baking paper and place it on a spit in front of the fire, turning it constantly. After about an hour, begin gently pouring the dough on it. Continue adding the dough and turning the spit for about five hours.
Posted by winebookgirl at 7:55 AM