Wine and Food of the Tour de France 2022 Stage 20, Lacapelle Marival to Rocamadour 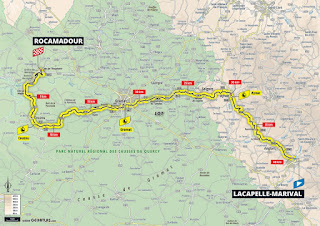 Where are we? In the Lot!
Lacapelle Marival: Another first time stage city!  Le Tour says The Quercy town of Lacapelle-Marival has played the role of a small capital of its territory since the Middle Ages.
Lacapelle-Marival is situated at the meeting point of three very different natural terroirs. To the west are the Causses du Quercy, karstic plateaus whose vast rocky expanses are ideal for sheep farming. This territory provided the wealth of its flocks of sheep, whose numbers were sometimes impressive. To the west are the wooded and fertile Ségala mountains, suitable for cattle breeding and, traditionally, for chestnut cultivation. Between these two very different environments, Lacapelle-Marival was established in the Limargue region, with its rich agricultural land favourable to cereal crops, walnut orchards and vines.
Le Tour regional specialties: farm lamb from Quercy (IGP designation, protected geographical indication), Quercy truffle, Quercy walnuts, pescajoune (pancake filled with fruit), golden greengage, walnut liqueur, Bois Bordet spring water
Rocamadour: A second first time stage city on the day!  The local tourist site tells me that: Just southwest of Padirac in the Causses du Quercy Regional Nature Park stands the sacred village of Rocamadour. Built on 3 successive levels, Rocamadour is both a place of legend and history where old stone houses, majestic towers and a castle keep cascade off the cliff into the Alzou Canyon.
Not only is the village one of France's most important tourist destinations and a UNESCO World Heritage Site, it has also been a crucial pilgrimage site on the 'Way of Saint James' for hundreds of years.
Rising up 120 metres, this vertiginous Citadel of Faith is best summed up by an old local saying: 'Houses on the river, churches on the houses, rocks on the churches, castle on the rock'.
The sacred city of Rocamadour boasts 4 beautiful arched stone gates: Porte Basse, Porte du Figuier, Porte Salmon and Porte Hugon.
The town below the monastic buildings lies on the lowest slopes. Trimmed with beautiful gold stone houses and lauzé roofs, the main street is entirely car-free and houses a number of charming restaurants and quirky boutiques.
Le Tour Regional specialties:Quercy lamb, duck, truffle, Rocamadour (goat cheese), walnut oil, Rocamadour (wine) 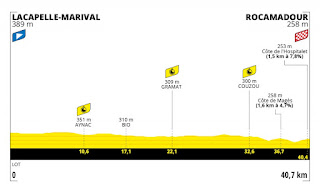 Christian Prudhomme says: Performing well in a time trial at the end of the Tour always requires a certain kind of alchemy, deriving from a rider’s degree of freshness after three weeks of racing, the extent of their motivation given their possible finishing position in the overall classification and their intrinsic qualities in this solo discipline. Added to that, in 2022 there will be a final with two climbs on the way to the high point of Rocamadour.
The stage: The early leader on the day was not surprising.

The provisional top 3 with 70 finishers:

"Top Ganna" was consistently faster and he's currently the only one with an average speed over 50km/h #TDFdata #TDF2022 pic.twitter.com/FeWi6W7lsO

Eventually it was time for green, a potential challenger to Ganna's time.

And, wow. He would smash Ganna's time by 42 seconds.
At the first time check, fastest time of the day by Pogacar. Yellow does give you wings, because he was 7 seconds faster.
An update from LeTour: Wout van Aert has been unanimously designated the super combative of the 2022 Tour de France.
Some would threaten, but he would hang on for the stage win.

An incredible day for @JumboVismaRoad and an emotional one for 💚 @woutvanaert 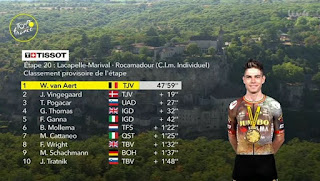 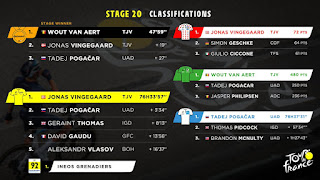 The wine: Fabien Jouves A Table!!! Rose 2021 from Copake Wine Works
Christy says: Cahor is about as close as I can get. How about a nice rose from Malbec??
From the importer: Fabien Jouves is from an old farming family in Causse and became a winemaker in 2006 when he created his first cuvée, “Mas del Périé”, on the highest slopes of Cahors.

Jouves’ estate, 21 hectares in the junction of Quercy and Cahors, was selected to highlight the many expression of Côt. Reinforcing this is Fabien’s commitment to biodynamic viticulture that respects “life, plant, man, and the environment.” Following biodynamic agriculture adds strength to his terroir by supporting the whole environment from the vines to the animals.

The vinification is completely natural without any oenological inputs. His wines are then aged in concrete vats, barrels, or casks, according to its characteristics and personality.

The food: The local tourist site has a summery recipe for us.
Rocamadour summer fritot:
Ingredients

Directions
Cut the aubergine and tomatoes into 8 mm thick slices.
Salt them and leave 5 mins to remove excess water.
Rinse and dry on kitchen paper.
Fry the vegetable slices in a little olive oil over a high heat.
Assemble the ingredients in an oven dish: a well-browned slice of aubergine, a slice of tomato, a Rocamadour, a slice of tomato and one of aubergine.
Bake for 8 mins at 200°.

Advice
Decorate with the herbs and serve with a little salad.

Posted by winebookgirl at 10:21 AM