We have all been shaken by the recent events in Japan. First the earthquake, followed by the tsunami and now the ongoing nuclear fears. Today I am happy to announce my participation in an online bake sale for Japan. Coordinated by Sabrina Modelle, the bake sale will take place on March 30th with bidding live for one day only. You'll have a chance to bid on baked goods and other sweets that participating bloggers are pledging. Although I have not seen the complete list yet, I'd imagine there will be some rather appealing items.

All proceeds will go to Second Harvest Japan http://www.2hj.org/index.php/eng_home

For those in the Bay Area, there will be a traditional bake sale as well on April 2nd. Because I'll be hosting a sleepover for K's 9th birthday that day, I will not be able to participate, though perhaps it might be a good place to find a birthday cake. I wonder if anyone would accept a commission? Details for that sale, taking place in several Bay Area locations, are here. 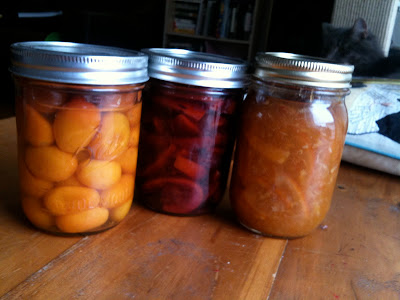 For my contribution,  I decided not to bake. As I have said before, my sweets taste good, but my decoration skills are lousy. Instead, I asked K to choose three jars of preserves, with a theme. She chose citrus, because,"It is cheerful."

All have been water processed and are shelf stable.
Posted by winebookgirl at 9:58 AM No comments: Links to this post

Corned Beef and a Bit of a Ramble

So Charcutepalooza.
Our March challenge was brining. Given that I have brined both chicken and pork chops numerous times, I decided to go with the Charcutiere Challenge: brine, and then corn, a piece of beef. Brisket is the classic cut. Cow tongue is another option. You choose. I opted for brisket, sourced from Marin Sun Farms at the Ferry Building Market.

Making the corned beef was easy enough that it kind of surprises me that I had never done it before. After all, we had corned beef every year for St Patrick's Day. Always boiled with potatoes, cabbage and carrots. In my memories I would get home from school, start the dinner and by the time my mother arrived home from work, the house would be fragrant with a scent I associated, in my 10 year old head, with Ireland. This was important because at 10 I was obsessed with Ireland. To be honest I was obsessed with Ireland, the Boston Red Sox, Brooklyn Dodgers stories, Chris Mullin and Theodore Roosevelt. Really.

The Ireland obsession came from two places. One was the copy of the collected poems of WB Yeats I found on my mother's bookcase on a rare sick day. How could I not fall in love?

"Come away, O human child!
To the waters and the wild
With a faery, hand in hand,
For the world's more full of weeping than you can understand."
The second reason for the Ireland obsession was genealogy. Like most Americans I am a mutt. But more Irish than anything else. And the stories from that side of the family were endlessly fascinating. My Welsh Congregational great-grandmother Sarah married my Irish Catholic great Grandfather,  Frederick, and was disowned by her family. They went on to have 17 children in 21 years, all of whom lived until adulthood.  For the record: Sarah, William, James, Verna, Mortimer, Bryan, Frederick, Mary, Vincent, Eugene, Rose, John, Virginia, Richard, Thomas, Ruth and Michael.

Their fourth son Bryan would go onto marry my Lithuanian Catholic grandmother, Antoinette, one of 9 herself. They had 7 children of their own, 6 boys and my mother, Sarah. Sarah would go on to marry Edward, a mostly Irish Brooklyn boy, whom she met when they both worked for the Brooklyn Public Library System.

But, you are probably not here to read about my family history. There is a recipe buried in this rambling somewhere. So we have the boiled corn beef for my mother's side of the family. But for my Dad, the Brooklyn boy, we have corned beef hash in honor of the visits to Junior's where I was only allowed cheesecake if I ate "real food" first. For me, real food at Juniors was corned beef hash, a much finer version than the canned hash I liked to eat at home, often combined in a bowl with canned corn.

Attempts to find the Junior's recipe online failed me, so instead I found a version on Epicurious and played around with it a bit. I could pretend that the changes I made were because of careful planning, but, really, it was a matter of market and Mystery Box leftovers in the fridge. So yellow onion became spring onion, cream changed to whole milk and red bell pepper to yellow. I'd probably use red pepper in the future, although the yellow is an okay substitute. After all, what better than hash to use up fridge leftovers?

Coarsely chop the corned beef.
Sauté onion and pepper in butter in a cast iron skillet over moderately high heat, stirring, until lightly browned, about 5 minutes. Add potatoes and continue to cook over moderately high heat, stirring occasionally, until browned, about 5 minutes. Stir in corned beef and salt and pepper to taste, then cook, stirring occasionally, until browned. Add whole milk and cook, stirring, 1 minute.
As I like my hash with scrambled eggs,  I kept my hash in a warm oven while I scrambled a few. But, feel free to substitute the egg preparation of your choice.

Below and blurry, me at six or so walking in the New York City St Patrick's Day Parade with my mother. Note the fake rabbit fur coat on me and real fur on my mother. 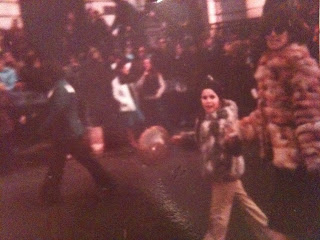 Posted by winebookgirl at 9:05 AM 2 comments: Links to this post

An event that I look forward to every year is the San Francisco Rhone Rangers Tasting. It can be said, and has been, that the first wine that ever wowed me was a Châteauneuf-du-Pape. It is also true that the first winery I ever visited in California was Bonny Doon.  I even wrote a few incoherent words (from Disneyland) about the tasting last year for Palate Press.
This year, the event will take place March 26-27 at the Fort Mason Center with over 100 of the top American producers of Rhone varietals in town for seminars Saturday and Sunday, a winemaker dinner Saturday night and of course the grand tasting on Sunday. Unlike many events, these are open to both the trade and the general public. Information can be found at: Rhone Rangers San Francisco Tasting.
All of the seminars sound appealing, but my top choice is probably:
Seminar #2 - " Mourvedre on the Move."
Saturday, March 26, 2:45 p.m., The Firehouse at Fort Mason.
Moderated by Jon Bonné, Wine Editor, San Francisco Chronicle
Participating Wineries: CORE, David Girard, Folin Cellars, Kenneth Volk Vineyards, Quivira Vineyards & Winery, Tablas Creek Vineyard, Tercero Wines
Long known for its ability to add structure and age-worthiness to blends, American Rhone producers are pushing Mourvedre to new heights. Taste Mourvedre-based wines from up and down the west coast--both varietals and as leading roles in blends--and learn why Mourvedre is on the move! Tickets are $45 each.
I also think that for those of you with slightly deeper pockets, the Saturday dinner sounds great:
A tasting of current and library releases, dinner with the winemakers and live auction at Dogpatch Studios, 991 Tennessee St in San Francisco.  Participating wineries include: Bonny Doon, Caliza, Clos Saron, Folin Cellars, J. Lohr, Kukkula, Landmark, Quady North, Quivira, Qupe, Ridge, Rock Wren Wines, Stolpman,Tablas Creek, Tarara, Terre Rouge, Terry Hoage, Thacher and Waterbrook. Proceeds benefit the Rhone Rangers Scholarship Fund. Ticket link here.
You can follow the Rhone Rangers on twitter @RhoneRangers and for those of you attending the event, they have asked you to tweet your thoughts with the hashtag #RRSF.
I'm pleased to say that I have one pair of Grand Tasting tickets to give away to a reader. To win, simply tell me in the comments section either your favorite Rhone grape or your favorite producer. 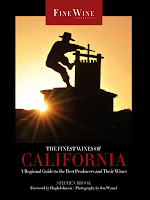 And if you are from out of the Bay Area or unable to make the event, I am pleased to offer instead a copy of the soon to be released The Finest Wines of California: A Regional Guide to the Best Producers and Their Wines by Stephen Brook. Just let me know one of your favorite California wineries and why.  The book features many California Rhone producers, as well as many more. More info about the book can be found here.
Winners will be chosen randomly on March 10, 2011. Thanks!
Posted by winebookgirl at 9:35 AM 14 comments: Links to this post