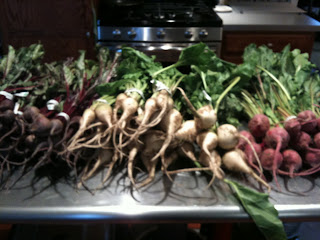 I did not expect to like the pickled beets we made last year as much as I did. But, I liked them enough that one night I found myself standing at the fridge, fork in hand, eating them straight from the jar. So this year, in our way we opted for several more varieties. At the farmers market Lisa found small red beets, larger golden, supposedly chioggia beets, and both small and large white beets.

Note that if you haven't worked with beets before, you will find that these are a good idea: 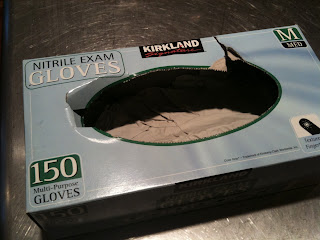 The golden and white beets were roasted and then pickled following the instructions in Doris and Jilly's pickled-beets-with-fennel. Like all of their recipes, it was a clear winner.

For the red beets, we opted for a variant on a Red Wine pickled beet recipe from Linda Ziedrich's The Joy of Pickling. Rather than use her suggested ginger and cinnamon, we added my beloved nutmeg (CT native that I am) and some star anise. These will sit for a few weeks before I open them, but the brining liquid smelled wonderful.

Roast the beets until tender. Cool and slip off the skins.
Put the rest of the ingredients in a non-reactive pan. If you like, you can put the spices in a spice bag though we opted to just scoop around them when adding liquid to our jars. Bring the contents to a boil, stirring to dissolve the sugar and salt. Simmer, uncovered, for 10 minutes.
Pack the beets into pint mason jars. We used small beets so left many whole, you may want to half and quarter larger ones.
Ladle the hot syrup over the beets, leaving 1/2 inch head space. Seal jars and process for 30 minutes.

Now to find a recipe for all of these beet greens! 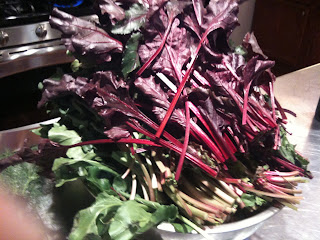 Posted by winebookgirl at 9:49 AM No comments: Links to this post

I Have a Cold

Which is not that big a deal really, so long as I am able to taste by tomorrow's Terry Theise tasting. Meaning, I am willing to put some effort today into feeling better. In my case that means wonton soup and a can of coke. Also, a workout even though I wanted to just sleep and a long, warm bath.

It has me thinking about the foods we crave when we are sick. I want coke, something I rarely drink except on road trips. I don't know if it is the sweetness or the caffeine or the carbonation, but cold, flu, ankle sprain, it is coke that I desire. Preferably the Mexican coke sold in glass bottles from the corner market, but in a pinch a can will do. Soup is also a given, though I find I prefer wonton or ramen to the chicken soup of my childhood.

The other constant craving is one that I rarely satisfy. When we were sick as children, my sugar restrictive mother used to make us custard. It was sweet and creamy and smooth, serving I suppose, the same purpose as my daughter's ice cream. I imagine it is a Jof of Cooking recipe, but I'll need to call home and ask. Mom would bake it in the oven, in a large casserole, never ramekins, placed carefully in a larger roasting pan filled partway with water. While sick, we were allowed it not just as a treat, but as breakfast as well. I haven't had this custard since, well, probably puberty, but I can still remember the taste of it on those days when strep throat made every thing else seem far too painful.

I think when I'm better, I'll make some custard. Anyone else have any regular illness food cravings?
Posted by winebookgirl at 1:04 PM 1 comment: Links to this post

I am pleased to announce that UC Press will be named 2010 Wine Publisher of the Year by the Gourmand World Cookbook Awards at the Paris Book Fair in March.

UC Press is the first U.S. publisher to receive the honor since 2003 and the first English language publisher since 2006.
In addition to being named Wine Publisher of the Year, five 2010 UC Press titles received top national honors: Daring Pairings by Evan Goldstein, The Finest Wines of Bordeaux by James Lawther, and Reading between the Wines by Terry Theise in three wine categories; The Gastronomica Reader edited by Darra Goldstein in food literature; and Cheap Meat by Deborah Gewertz and Frederick Errington in culinary history. All winners will compete for the Best in the World title, which will be announced in March.
This marks a second year of big Gourmand wins for UC Press.  In 2009, five UC Press wine books received national and international top honors from Gourmand, including North American Pinot Noir by John Winthrop Haeger, South-West France: The Wines and Winemakers by Paul Strang, The Finest Wines of Tuscany and Central Italy by Nicholas Belfrage, The Finest Wines of Champagne by Michael Edwards, and Been Doon So Long by Randall Grahm.
The Gourmand World Cookbook Awards were founded in 1995 by Edouard Cointreau to honor the best food and wine books in the world and to increase knowledge and respect for food and wine culture.  Publishers from more than 100 countries nominate thousands of books every year.  Selected books first compete in a national competition before moving on to The Best in the World competition.
Posted by winebookgirl at 6:02 PM 1 comment: Links to this post

So an update on the status of the mystery box vegetables: cauliflower and beets roasted over the weekend and packed to take to work for lunch. However, many of the other items sit in the fridge still, mocking me each time I open the door. As I'm home with a sick K today, I chose not to eat the roasted vegetables but to make something warm and comforting with some of the remaining box items- a quick lunch that will hopefully protect me from some of her germs. This is really cooking without a recipe, but I'll include one anyway.

Saute bacon in a cast iron skillet over medium to low heat until slightly cooked, not yet crispy but no longer raw. Add onion and saute until soft. Add cabbage, in batches if necessary and continue to cook, stirring periodically. Heat water and cook pasta according to package directions. Mine took about 15 minutes which was just enough time for my cabbage to cook through. Drain pasta and serve with sauce.
I used about 1/4 of the cabbage mixture for my serving. The leftovers may end up on pasta again or might be a side dish for oh so pretty Fatted Calf pork chop I have thawing in the fridge. Or, I may just eat the rest with a spoon.
Posted by winebookgirl at 12:42 PM No comments: Links to this post 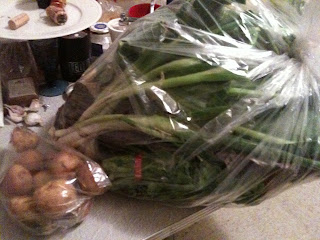 I've always meant to join a CSA. But, practically, as a single adult living with a veggie-hating child, I've always been scared away by the quantities involved. I love vegetables, but a full box every week is simply too many for me to eat. I've thought about sharing with friends, but I'm lazy and coordinating seems like a hassle. So a few years ago I was delighted to hear about the Mariquita Mystery Box. I was familiar with Mariquita from their years at the Ferry Plaza Farmers Market and had even considered their Two Small Farms CSA. But, commitment.

The Mystery Box, however, is perfect for people like me. First of all, it is opt in. Julia sends out an email and you choose if that week will work for you. Second, it is bi-weekly, which gives me a far better shot at eating rather than simply composting. Third, the pickup site rotates from a group of restaurants around San Francisco, but once a month includes Katie's favorite Piccino. There she can have her beloved margherita, no green and I can have a glass of wine from their appealing wine list and a pizza of my choice, generally topped with eggs. It is the perfect time for us to talk and relax. Katie, by the way, likes Piccino so much that she has chosen it several years running for her birthday meal.

To give you a sense of the Mystery Box, I'll list the contents from this week along with a few pictures. For $25, it is an amazing amount of food. And more importantly, not just quantity but quality. If you live in San Francisco, you really should try it at least once. Produce changes through the seasons, but always includes a list available online with recipes and links to even more recipes and information. 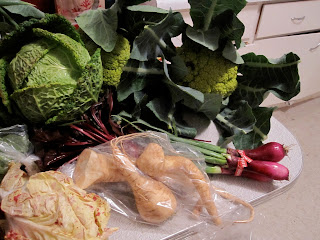 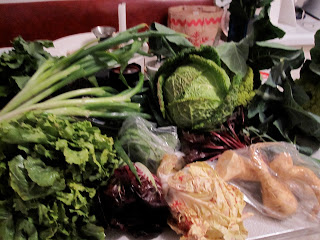 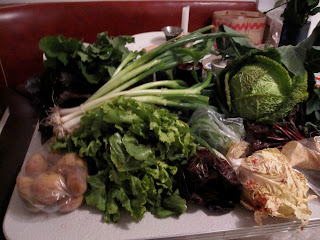 Posted by winebookgirl at 7:45 PM No comments: Links to this post