From LeTour: Jean François Pescheux's view
Expect some real damage: "Initially, there will be plenty of hoopla around the yellow jersey: whether it's Cavendish or Kittel, we should expect the race to unfold in exactly the same way, and the same goes if Sagan has it. That's because this second stage is a real rollercoaster ride: the Col de la Serra and Col de Vizzavona, followed, at the end, by the Côte du Salario. If you ask me, this parcours is going to cause some real damage! The sprinters will bail out one after another. I even think a team leader who is not in the best of condition ? I'm thinking of how Evans was last year ? could see all of their hopes dashed on this stage, before sinking altogether on the stage that follows, on a course where it will be even harder to hide away..."

I lead today with the stage profile picture because the rollercoaster-like aspect of it should make for an interesting day. Can the pure sprinters hang on or is it a day for the classics type riders?  We shall see. To my amazement, Tony Martin started the stage after his crash yesterday. From the crash he had a "concussion and a contusion on his left lung. He also has soft tissue damages on his hip, chest, left knee and shoulder, and also on his back. Furthermore, he has a very deep wound 5cm wide on his left elbow that reaches his muscles, which causes a lot of pain and a problem moving his arm.” Never let it be said that bike riders are not tough.

My Podium Cafe Stage Predictor picks of the day are a mixed lot because I just could not decide how the day would go: Gilbert, Sagan, Boasson-Hagen and Mark Cavendish.
Some thoughts from Cav on twitter to start the day:
MarkCavendish 2:07am via Twitter for iPhone

I'd love an explanation from @UCI_cycling as to why time was neutralised on yesterday's stage, but not points. Were only GC riders affected?
MarkCavendish 12:25am via Twitter for iPhone

A bit upset after yesterday's finish, but have to count myself lucky compared to some guys who crashed hard. Feel so bad for @tonymartin85.


The likely doomed break of the day: David Veilleux (Europcar), Blel Kadri (AG2R), Ruben Perez (Euskaltel) and Lars Boom (Belkin). They dangled for quite a while and with just about 100 km to go had a gap of three minutes.
Meanwhile, Corsica continues to be gorgeous.
On the road, with about 80 km to go, the gap had been cut to 35 seconds. Would they catch them and risk further breaks or let them dangle? Dangle it turns out and eventually splitting. And from the field an attack from Voeckler. Although he ends up going nowhere, expect to see similar attacks from Voeckler in the days to come.

In the peloton, the sprinters are indeed being dropped, including both Cavendish and the race leader Kittel.

Marcel Kittel dropped too. Many being left behind now after FDJ set the pace in the bunch. Being dropped so early makes it hard to get back

Very quickly the gap to the grupetto/autobus grew. Perhaps the Orica-Green Edge bus from yesterday could join them?

Group with Kittel & Cavendish 2½ min after the peloton. #tdf

Ahead, Pierre Rolland reaches the King of the Mountain point first, followed by Kadri and Brice Feillu at 21 seconds, the main peloton at 31 seconds. Kittel's yellow jersey group was more than six minutes behind, with Cavendish even further back.

opqscyclingteam 7:28am via Janetter
Rolland caught by the peloton, 45 km to go #TDF

opqscyclingteam 7:39am via Janetter
35 km to go, group with yellow jersey is 6.35 behind the peloton #TDF

Under 20 kilometers to go and the main peloton was still all together.

inrng 8:00am via Web
Race coming into Ajaccio now. Fast run through the town and then a sharp right-hander away from the sea front to start the Côte du Salario

Then came the predicted attacks on the climb:

Froome was fairly quickly caught, but fun to see. Heading towards the finish, Sagan seemed the clear favorite, but would there be another surprise? Cross winds and a small group ahead on the road made things more confusing as teams did not want to help Sagan's Cannondale chase.

inrng 8:17am via Web
5km to go and six riders away. Not many teams left behind to chase, Cannondale looking tired. Garmin-Sharp fighting for yellow

A dog on the course scared everyone for a moment, but it was able by inches or so to run off. Dear race attending dog owners: Please keep your dogs on leash.

A surprise indeed as a lone rider from the break held off the rapidly charging peloton. 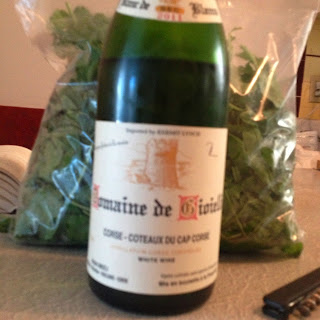 From the importer, Kermit Lynch: Cap Corse, a largely isolated and thinly populated peninsula at the top of Corsica, sits like a finger pointing up at Genova, its former colonial ruler. The Genovese landed on the Cap in the 14th century and from there soon conquered the entire island. On the Cap, they left an indelible mark on the land, building towers on the cliffs overlooking the sea to watch for other invaders. One Genovese in particular, Monsignor Doria, from one of the most illustrious families of the Genovese Empire, landed in the Cap and settled in a cove not far from the sea, creating an estate he came to call his “Gioielli” or his “Crown Jewel” in the dialect of the time. A villa was built in the middle of the hills which form a natural amphitheatre and on which vines and olives were planted and flourished.

Several centuries later, with the Genovese long since expelled, the towers they built left  crumbling (such as the one on the domaines label), and the Doria estate abandoned and in ruins, a young Corsican by the name of Michel Angeli moved in and reclaimed the land. Michel is from the nearby city of Bastia, but moved out to the country with his family to escape the bombardments of the city during World War II. It was then in the countryside that he found solace as well as finding the forgotten piece of land called Gioielli. After the war he took cuttings of Vermentinu and Codivarta from neighboring farmers, some Niellucciu from Patrimonio and some Aleatico from nearby Elba Island to replant his slopes. His first harvest was in 1952 and Gioielli was reborn, much to the delight of the local seafaring and fisherman population, who have remained loyal clientele ever since.

Little has changed at the domaine since it began, and it is still Michel who works the vines and makes the wines on his own as he has done for nearly six decades. The tourist buses do not stop at Domaine Gioielli—in fact, it is very hard to find. Angeli never intended to make his wines known beyond his neck of the woods and never exported anywhere, not even to mainland France (!) before meeting Kermit. Since the beginning he has paid little attention to the outside world, uninterested in the new technologies and fads that have afflicted so many other domaines. His wines have a timeless sense of place, much as the one who makes them, a wise, gentle, true artisan who lives for his métier.

From Dig:  Gioielli means "Crown Jewel," and Michel Angeli has run this ancient estate at the northern tip of Corsica since 1952. Made of Vermentinu, his Cap Corse Blanc is all about minerals, smelling of salty sea air, tasting of citrus and white rock. Superb with all kinds of sea creature.