Wine and Food of the Giro 2016 Stage 14: Nusserhoff Lagrein & Rose of the Dolomites 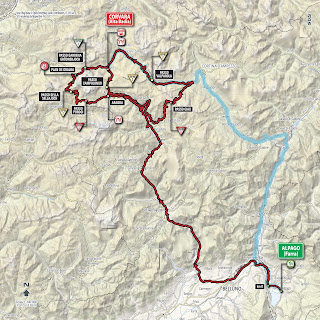 Where are we?
The Giro site says: Alpago is a wonderful “terrace” surrounded by the Dolomites, a circle of mountains reflecting off the blue-green waters of Lake Santa Croce. A perfect place to lie on the beach or to go sailing, kitesurfing and windsurfing, thanks to the breeze that blows from Sella Fadalto every day, and taking advantage of a ban to motorboat

The trees of the Cansiglio forest provide the perfect setting for summer hikes and winter sports. The plateau, with its rich history, is home to a Cimbrian enclave, to which a museum has been dedicated.
COOKING: Agnello dell’Alpago (local lamb, Slow Food presidium), mame (typical local beans), sciosele (small mountain snails), traditional cold cuts and cheeses, lavaret dishes (lake fish)

Lying in a sunny valley at the foot of Mount Sassongher, Corvara has a long tradition as a holiday resort. Alta Badia offers tourists coming from all over the world more than 400 km of hiking trails, 500 km of ski slopes, mountaineering opportunities and, especially, breath-taking views of the most beautiful peaks of the Dolomites.
The native language of the majority of the locals is Ladin; their culture is deeply rooted and has been preserved over the centuries by the mountains.
A famous long-distance road bicycle race (granfondo) called “the Dolomites Marathon” takes place in the valley every year.
COOKING: Barley soup, turtres (savoury spinach- or sauerkraut-stuffed pancakes), ravioli with a spinach stuffing, furtaies (fried funnel cakes)

With 100 kilometers to go, a break group had over eight minutes. Ruben Plaza was out front, with a small gap over the rest of that group.

Out of the race, Ryder Hesjedal, suffering from stomach issues.  55 kilometers to go and Plaza had almost two minutes over the chasers. Back in the main peloton, Movistar continued to control the pace. A convenient update from the Giro social media team:

With 51 kilometers to go the situation on the road was Plaza with two minutes over the chasing De La Cruz, Lopez, Atapuma, Moser, Siutsou, Zeits, Busato, Kochetkov, Roche, Preidler, Monfort, and Denifl, with the pink jersey group at 8:45. That gap to Plaza was dropping quickly though (or had been mis-reported earlier), as at 50 kilometers to go it was only 34 seconds. Behind, Astana to the front of the peloton. Meanwhile, I'm dreaming of a trip to the Dolomites.

Immediately after that tweet, Plaza would be caught and dropped. The gap to the very small pink jersey group was just over five minutes with Scarponi once again pushing the pace at the front. At the back of the group, Amador looked like he night be struggling and was soon dropped.

Wow. On the descent Amador made it back. Could he hold on?

The situation before the last effort of this stage #girohttps://t.co/22UIsMVDvs pic.twitter.com/qWl5vZgYt6
— Giro d'Italia (@giroditalia) May 21, 2016

And Valverde struggling. Time for Amador to turn back into a domestique. Nibali could be riding himself into pink.
Twenty five kilometers to go and Atapuma had two minutes over the Nibali group. Valverde perhaps 30 seconds further behind. Lots of attacks from the small groups on the road. Chaos is fun to watch but hard to write about. Nibali in trouble as well as Chazes accelerates with Kruijswijk.


That was a brilliant stage. The clear loser on the day: Alejandro Valverde. 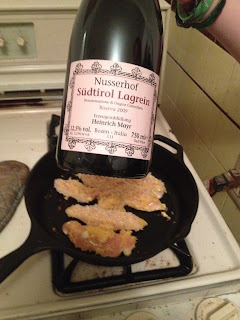 Wine: Nusserhoff Lagrein
Eric Asimov in the New York Times has things to say: "FEW things are simple in northeastern Italy, least of all lagrein, a red grape that can produce fresh, aromatic, highly seductive wines. Why, just last week, I asked a linguistically minded friend who is fluent in Italian for the proper pronunciation of lagrein. Here is his response, or part of it:

“Lagrein is a tough one,” he said, “in part because it’s pronounced using a Germanic, as opposed to an Italianate vowel system.” He went on to offer his preference, lah-GRAH’EEN, but allowed that lah-GRINE and lah-GREYE’NE (where greye rhymes with eye) were also acceptable. Well, linguists are nothing if not perfectionists. But even allowing for such hairsplitting, lagrein comes with ample grounds for confusion. It is grown primarily in Alto Adige, a region so far to the north in Alpine Italy that it practically touches Austria and Switzerland. There, the culture is more Tyrolean than Italian, and the first language is often German. Many wines from the region are labeled in both Italian and in German. Even the name of the region, Alto Adige, does not speak for itself; it is generally rendered bilingually with its German counterpart, Südtirol (South Tyrol, using the Germanic vowel system, of course)."
I say: A very happy wine for me. Lagrein with some age on it. Fuller and earthier than some some lagrein, but with enough acid to balance it out. Black cherry. Hint of an aged balsamic. Still vibrant on day three. 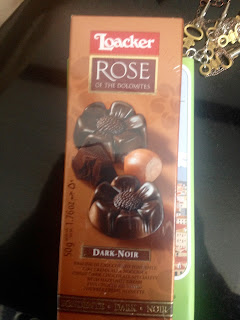 Food: Loacker “Rose of the Dolomites”
How could I resist? I went with the dark chocolate version. Alfons Loacker started in his little patisserie in Bozen in 1925. All products are produced and processed in Auna di Sotto/Unterinn (South Tyrol/Italy) and Heinfels (East Tyrol/Austria), according to traditional family recipes.

Posted by winebookgirl at 8:26 AM