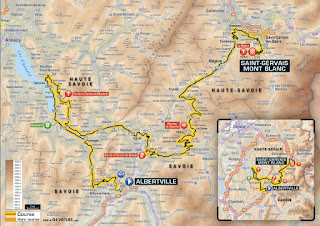 Where are we? Riding 146 kilometers from Albertville to Saint-Gervais Mont Blanc

Albertville is a third time stage town in the Savoie and the host city of the 1992 Winter Olympics. The local tourist site tells me that: Since its foundation, Albertville situated at the crossing point of four alpine valleys the Combe de Savoy, the Tarentaise, the Val d’Arly and the Beaufortain; has always been a place of cultural exchange and meetings.

Since its creation in 1836 by King Charles-Albert, who united the city of Conflans and the borough of l’Hopital, Albertville developed through commercial exchange between France, Italy and Switzerland. It harnessed the water course and installed thriving industries (paper mills, tanneries, hydroelectricity…) and became the administrative centre for the entire district. In the second half of the 20th Century as winter sports took off and agricultural thrived, Albertville consolidated its position as a properous alpine town.

Saint-Gervais Mont Blanc is a third time stage town, a spa and mountain resort in Haute-Savoie. The local tourist site tells me that: Natural spring waters have irrigated the spa for more than 200 years. The hydrotherapeutic properties of the water here class Saint-Gervais as the only alpine spa resort in the Alps, one of 10 other spa towns in France.
The 19th Century spa architecture gives the town an antique-chic atmosphere, quite original in a ski resort!Saint-Gervais lies at the heart of the Evasion Mont- Blanc ski area offering 445 kilometres of slopes towards Megève, Combloux, Les Contamines Hauteluce and La Gietaz.

The resort also benefits from 55 kms of slopes on the opposite side of town in Le Prarion and Les Houches, accessible by the Mont-Blanc Tramway, one of the oldest rack and pinion railways in the country.

From LeTour Christian Prudhomme's comment:
An amazing scenery: the Mont Blanc will be ever present all along the day.It'll also be the opportunity to discover two mountain passes of La Forclaz which will make it a total of three with the swiss Forclaz.Will then follow, the brand new climb up the Mont Bisanne which will hurt the legs of many before the final climb to Le Bettex through the tough paths up the Côte des Amerands.

The stage: The stage profile for today is intimidating, but at least the scenery will be nice. 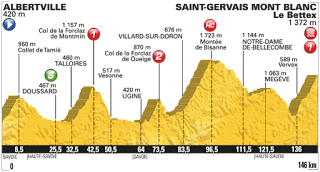 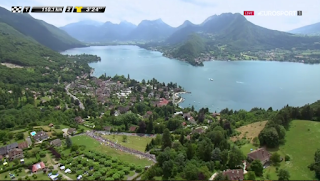 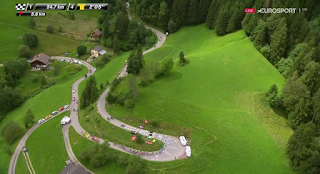 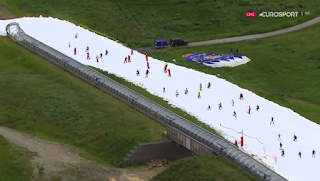 Ahead, an ugly crash for Rolland as the start of the rain made the new road surface slick. He would eventually remount. Back up ahead, Rui Costa is in the lead, descending with speed.
Another crash, this one involving FDJ riders and slowing Richie Porte. With the help from teammates, he would rejoin the yellow jersey group.

More crashes. The wet roads are wreaking havoc. Froome down and taking a bike from a teammate. Nibali fell and slid into him. Many riders spread out over the road.
10 kilometers to go and Costa had 45 seconds over Bardet and 1:41 over the yellow jersey group. Mollema is even further behind that group, so there may be podium changes.
At the front, Bardet would catch Costa. Six kilometers to go and their gap was under 45 seconds. He would drop Costa. Behind, an attack by Dan Martin. Yates looked to be in trouble. 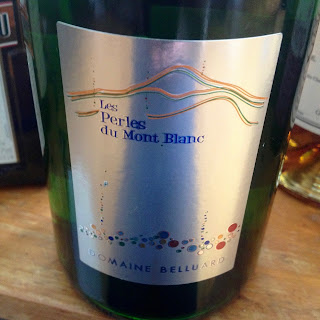 Wine: Domaine Belluard Mont Blanc
I had not planned on this wine, but all the images of Mont Blanc convinced me and I'm both glad that I opened the bottle and that I have more to drink later.

From Selection Massale: Ayze is only about 30 miles from Mont Blanc, but the Belluard vineyards are planted relatively lower to allow ripening.  Dom has vineyards planted from 300 to 450 meters above sea level.  Make no mistake, these are mountain wines.  But they are not planted next to ski slopes.  All are farmed biodynamically and were planted by selection massale.  The vine ages vary from ten to sixty yearls old.  Domaine Belluard has about half of the Gringet planted in the world.
Mont Blanc is a vintage méthode Champenoise that spends years on the lees, made from grapes grown at 450-meters in iron heavy soils. 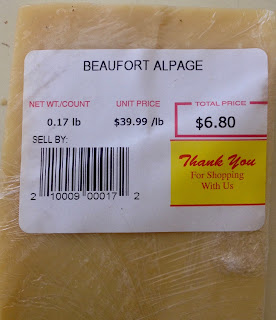 Food: Beaufort Cheese
Fromages.com tells me that:
Beaufort has been celebrated since the Roman era. It takes about 500 litres (130 gallons) of milk to make a 40-45 kg  wheel of Beaufort. The cheese is made from the milk given by the mahogany-coloured Beaufort cows, called the Tarines or Tarentaises. This ancient mountain breed originally came from the Indo-Asian continent. Beaufort cheeses come in three versions, Beaufort, Beaufort d'été (summer Beaufort),and Beaufort d'Alpage which is made in the mountain chalets and is the most tasty. Ripening takes at least four months in humid (92%) cellars with the temperature below 15° . The cheeses are constantly wiped and rubbed with brine. Young cheeses have a mild fruity, sweet taste then the taste become stronger and complex. The pate of the winter cheese is white, whereas the summer cheeses are a pale yellow, due to the cows munching on the alpine flowers.
Posted by winebookgirl at 9:15 AM