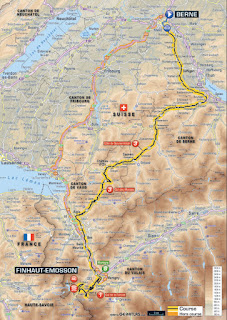 Where are we? Staying in Switzerland. Leaving Berne and heading 184 kilometers to Finhaut-Emosson.

Finhaut-Emosson located in the Canton of Valais, Finhaut is mainly known since the construction of the last major Swiss dam, on the Plateau d'Emosson. The superb lake that it created is supplied by the water of the Tour glacier on the Mont-Blanc mountain.
The local tourist site tells me:

A major Alpine resort in the early 20th century, this village is nowadays well-known for its protected natural heritage, for the Emosson reservoir and its three dams, and for the VerticAlp Emosson attraction park, which has the steepest two-cabin funicular in the world.
The Vieux-Emosson valley contains a very different type of attraction: over 800 dinosaur footprints, dating back about 250 million years.

From LeTour:  Christian Prudhomme's comment
From north to south, it'll be a day of discovery and 100% Swiss with a spectacular finish situated at the Emosson dam.There will be opportunities to seize on the sequence of 13 kilometre heading to the summit of the Col de la Forclaz, and then on the 10 kilometres that remained to be covered to reach the Emosson dam.

The stage: DNS (did not start) today from Mark Cavendish, who is off to contiune his Olympic training. He'll be missed, especially on Sunday.


The eleven are Sagan, Majka, Clement, Kangert, Pantano, Zakarin, Pozzovivo, Morabito, Durasek, Feillu, and Gallopin. They would be joined by
Lutsenko, Van Avermaet and Voeckler. With 55 kilometers, their gap was over 10 minutes. 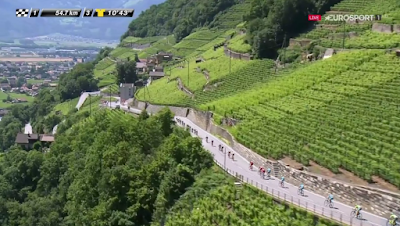 
Twenty eight kilometers to go and the gap was over thirteen minutes. Majka and Pantano were at the lead. Would we see action from the yellow jersey group behind?

In the yellow jersey group, many riders dropped, including Tejay van Ggarderen. Nibali, at the front, drinks a Coke. Action ahead? Maybe? 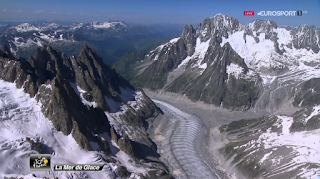 Behind in the yellow jersey group, Nibali remained at the front as the group continued to shrink. But then, he too was gone. Great work for his teammate, but could Aru take advantage of it?
Here came the attacks from the group. Valverde! But he would be brought back. Next to try, Dan Martin.
Ahead:

He would take the stage. So steep that he struggled mightily to zip up his jersey. Next in: Pantano. Behind, Sky domestiques still at the front of the group with two kilometers to go. An attack by Porte. Up next, Aru. Mollema off the back! But then, Froome with Quintana on his wheel. He would drop him and reach Porte. Wow, Quintana is dropped by the group behind. Lots of gc changes today. 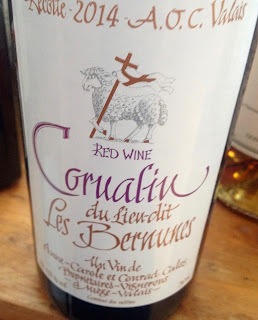 Wine: Cave Caloz Corualin du Lieu- dit Les Berunes
From FranklyWines
From the importer:
The Caloz family established their domaine in 1960, setting up their home and cellar in the village of Miege which sits midway between the town of Sierre, at the southern end of the Valais, and the famous ski area of Crans-Montana. Fernand Caloz, father of the current proprietaire, began the arduous process of tending the vines in this mountainous region where the vineyards sit on steep terraces and must be worked by hand. Conrad Caloz, son of Fernand, joined by his wife, Anne-Carole, now manages the affairs of this small family domaine.
An expression of exuberant wild berries marks the best of the Cornalins produced in the Valais. Again, the exceptional exposure of the “Les Bernunes” vineyard permits the Cornalin grape to ripen well, producing a purple-tinted wine that is vivacious and lightly tannic in the finish 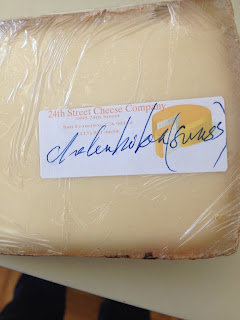 Food:  Challerhocker Cheese
From Cheese.com: Challerhocker, pronounced "holler hocker", meaning "sitting in the cellar" is a Swiss cheese washed in brine and spices and then aged for a minimum of 12 months. Made from thermalized milk, the cheese is dense and smooth without any holes or cracks.  The repeated brine washing and extended aging reveal a great depth of flavour and texture unlike any Swiss cheese. Its initial aroma and flavour is a lovely concoction of roasted peanuts, melted leeks, brown butter, sweet cream and caramel. Made by cheesemaker Walter Rass, the lingering silky, salty finish of Challerhocker makes it an ideal cheese for the winter months.

Note: I really liked this cheese.

Posted by winebookgirl at 8:51 AM